As we continue to bring awareness to persecuted Christians all over the world this month, we can look back to 3 Christians in history and what God did through them during their suffering.

Out of Intense Suffering, God is Creating Diamonds

Deep within the earth something magnificent happens.

Far below the surface where there is no light and hardly any air, common rock becomes transformed into something exquisite….diamonds.

Intense heat and incredible pressure create the conditions which form the rarest and most beautiful gemstones on earth.

It was the same way as with our Heroes of the Faith from the 20th Century: Corrie ten Boom, Dietrich Bonhoeffer, and Richard Wurmbrand. 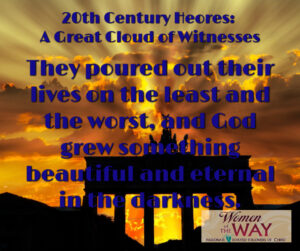 Their inspirational lives are a witness to the power of Christ working in dark places.

They were common, everyday people whose love for Jesus compelled them to live out their faith in uncommon ways. They pursued the narrow path of Christ, even if it meant giving up their lives. They followed the Savior not down a path of ease and convenience but down a path of extreme difficulty and hardship.

They were taken captive and persecuted for living out this faith. They experienced the torture of what one human can do to another human when guided by evil and darkness. During their time of persecution, their faith experienced such intense heat and pressure that their lives were transformed into something magnificent like precious gemstones!

We benefit from their refinement

Out of their trials and tribulations overflowed such beautiful and powerful demonstrations of God’s might working through them that they pierced the darkness with light, and we can never be the same because of it.

Each of them experienced persecution in different ways. Each of them were uniquely equipped with talents and skills which were put to use during their persecution. As a result, the diamonds produced in their lives were exquisite.

Corrie ten Boom’s love for people extended to everyone she knew. Before her persecution, she loved children with disabilities, poor people in need, and Jews (the apple of God’s eye as her father called them). Her love for people continued even during her difficult time in the concentration camps, and it expressed itself in many ways. She served the women in her bunker of the concentration camp teaching and leading them in worship services. She shared food and vitamins with sick or pregnant women. She encouraged women whenever possible by never letting them forget that even in their darkest days “Jesus is Victor!’ She shared love and forgiveness with her enemies. Even more, when her captivity was over, she never stopped loving and serving people throughout the world. She built recovery homes for people who survived the war. She spoke and wrote about the power of love and forgiveness that only comes through Jesus Christ. She loved people so much she never stopped telling them the truth of the Gospel.

Dietrich Bonhoeffer was educated and academic. He asked lots of questions and thought about ideas deeply. Though he also truly loved people, the diamonds that resulted from his time of suffering and persecution were through his letters, writings, and books. During his years in prison, he was able to ponder spiritual ideas and test them against his experience in prison. He explored ideas of theology and doctrine and how those ideas should be practically lived out by believers. Because of his suffering and persecution, we have great works such as “The Cost of Discipleship” and “Letters from Prison”. Though his life was cut short by martyrdom, we still benefit from these diamonds produced in his life.

Richard Wurmbrand’s experience in prison was pure hell. He suffered solitary confinement, starvation, and torture for 14 years. His secret prison was below ground where there were only dark walls and dirt floors. He reported forgetting what colors looked like. For many of those years, he had very little contact with other prisoners. They would tap morse code on the walls to communicate, so he didn’t even have the privilege of being around other people like Corrie. He had no access to paper, pens, or books, so he could share his thoughts or write letters to the outside world like Dietrich. The ONLY thing he could was pray. He meditated on Scripture, and he prayed. He prayed for his captors even as they tortured him. He never stopped praying.

The diamonds produced in his life were precious stones that we will never see this side of heaven. After his living hell was over, he described how during those times of intense prayer and meditation, he would experience the direct presence of God. He would be enveloped in dazzling colors and light. The physical dimension of his cold, dark cell of confinement would disappear to the reality of the spiritual realm where he could see visions of heavenly places. These other worldly experiences provided him with more  joy and love and peace than he ever thought possible. As his body was broken, he drew into deeper spiritual communion with God that we will only experience when we enter eternity.

After his captivity, Richard never stopped preaching and serving the Lord. He worked for years on behalf of other persecuted Christians around the world which resulted in the world wide organization we know today as the Voice of the Martyrs. 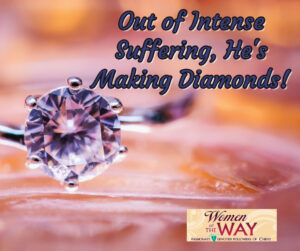 A Faith of Exquisite Worth

Their physical bodies withered from the neglect, pain, and torture, but their spirits flourished from the presence of Christ coursing through them! They poured out their lives on the least and the worst, and God grew something beautiful and eternal in the darkness. They were evidence….proof…..that allowing their lives to be planted like a seed, even dying for the sake of Christ, would reap a harvest for the Kingdom many times over!

Out of the heat and pressure of suffering and persecution, God formed in them a faith of exquisite worth.

May we learn from their examples and allow God to work in us during times of intense pressure.

Please continue to remember and pray for Christians around the world who are being transformed into exquisite diamonds even now.

Go to persecution .org for stories and resources.