Let’s continue our journey studying some Heroes of the Faith.

As we examine the ministries of OT prophets, I find it fascinating how the circumstances of their personal experiences shaped their ministries, and in turn, how the conditions of their ministries impacted their lives on a personal level. We aren’t just learning about what messages they preached, but also how they ministered, and how it affected them personally which will help us in our own ministries and relationship with God. How is it possible to have complete joy even in hard places?

In the first session, we discovered Jeremiah, the Weeping Prophet. Despite enduring severe persecution and hardship, both his faithfulness to God and his compassion for the people never wavered. During the entire Babylonian captivity,  Jeremiah was left behind in Jerusalem to prophesy to the Jews left there.

Now, we turn our attention to Ezekiel (let’s call him Zeke)- a young man preparing for the priesthood. Zeke was taken into captivity in the second round of exile (there were 3 rounds of captives taken in all). The book of Ezekiel began 5 years into his captivity, the same year Ezekiel turned 30 years old. This detail is significant for Zeke because he would have begun his ministry as a priest if not for the slight detour of his captivity.

Well, God had different plans. Instead, God revealed Himself in an extremely unique and powerful way to Zeke and changed the whole trajectory of his life. Just like Jeremiah, this priest-turned-prophet’s ministry was sustained and characterized by his unique calling, his powerful experiences with God, and his suffering and persecution.

During his exile, Zeke and the other Israelites were part of a working camp down by the Kebar River. It was down by this river where Ezekiel experienced a revelation of God in such a radical way that he hardly had words to explain it (Ezekiel 1-2). In the year Zeke would have begun his priestly ministry back in Jerusalem, God invited him into a completely different ministry. He would preach to the people not only with words but with dramatic, often strange, demonstrations. Nothing less than complete obedience was expected from Ezekiel to convey to the people God’s word. His mission was to prophesy to the people in their captivity about how they had rejected God. The hard part, though, was that they weren’t going to listen to him. God’s mission was clear- no matter what you say, they won’t listen but tell them anyway. No matter how hard is it- tell them everything I say. And only what I say.

When God called Zeke into such a important ministry to the people during such a significant time in history, He didn’t disappoint with revelations of His power and majesty! God revealed Himself in such a glorious, beautiful way, Zeke hardly had the words to describe it and was overwhelmed by the splendor of God’s presence. He felt God’s strong hand take hold of him (Ez 1:3). He ate the scroll filled with funeral songs and words of sorrow, yet when Zeke filled his stomach with it, the scroll was sweet as honey (Ez 2:8-3:3). He heard the sound of wings beating together as the Spirit lifted him away, and the Scripture said “The Lord’s hold on me was strong” (Ez 3:12-14). 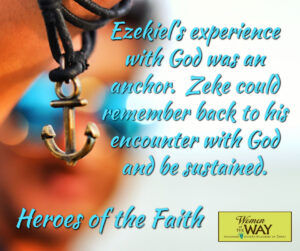 Ezekiel’s experience with God was an anchor. When the mission was physically, emotionally, and spiritually difficult, Zeke could remember back to his encounter with God and be sustained. The trials were worth it because the encounters with God were even more worth it. This is where complete joy is found!

God told Zeke straight out of the gate that the people wouldn’t listen to him. No matter what he said or what crazy things he did, their hearts would be hard- they would not listen (Ez 2:7). This must have been difficult to say the least. Then, instead of preaching with words, Zeke was told by God to perform these various sign acts or dramas like walking through town with his hands tied demonstrating the siege and exile (Ez 3), lying on his side for a year  and cooking his food over excrement (Ez 4). How about shaving his head and burning the hair (Ez 5)? Yep, he did that.  The most painful sign act for Ezekiel to endure was not to express any mourning for his wife when she died (Ez 24: 15-18).

Wait…this isn’t what I signed up for!

Ezekiel didn’t endure any physical persecution like Jeremiah. However, it seems like to me, he must have experienced the feelings of isolation and loneliness, people thinking he was weird and crazy, maybe even doubting what God had instructed him to do.

If I had been in Zeke’s shoes, I would have thought many times, “Wait…this isn’t what I signed up for!”

Maybe in a low moment of self-pity and loneliness, I can imagine Ezekiel thinking, “This isn’t how I thought my life would turn out. I was preparing to be a priest, my life was all laid out before me. Then, we were exiled to a strange land, God called me to be a street prophet doing all these strange dramas where people look at me weird, and no matter what I do they won’t listen. This is hard. I didn’t think my life would turn out this way!”

Remembering The Weight of God’s Glory

But then, Ezekiel would remember sitting by the river and being overwhelmed by a heavenly presence. He would be taken away to experience sights and sounds he’d never imagined or could hardly describe (Ex 1). He would remember the weight of God’s glory pressing down on him and feel the peace and love that surrounded him (Ez 2, 3) . He could taste how the scroll given to him resembled honey in his mouth and how it filled and satisfied him like nothing else he’d ever eaten (Ez 3:1-3).

He would remember these experiences in God’s presence and be motivated all over again to continue the mission God had given him. After experiencing such awe and wonder, how could he not? He was compelled. He was driven. After such sweet glory, he couldn’t help but do what God had told him to do. He had tasted the divine, and he would never be the same.

Do you look at your life and think, “I didn’t sign up for this!”

Does your life resemble nothing like you thought it would?

Do you look at your life and think, “How did I end up here?”

Yeah,  I betcha Zeke did too.

So………Just like Ezekiel…….when the going gets tough, look for your anchor.

How has God revealed himself to you?

What experiences have you had in God’s presence to sustain you?

What has God given you that tasted so sweet, it filled you like nothing else?

How has God revealed the weight of His glory so strongly that you can’t help but do His will?

These experiences are anchors for your soul and how joy revealed. Through them you can remember- yes, God is leading me. Yes, God is with me. And, Yes….this is worth it!

Ezekiel never made it back home to Israel. Unfortunately, he died in captivity in Babylon. He delivered God’s messages to the people. As tough as it was, he did it just like God said. He witnessed from afar the destruction of Jerusalem just like God said would happen (Ez 33).

But God had one last surprise for Ezekiel. In chapters 40-45, God revealed himself one more time to good ol’ Zeke.

After all the terrible warnings, after all the graphics descriptions of Israel’s waywardness, after the promise of destruction had been fulfilled, God ends Ezekiel’s ministry with eternal hope!

One last time, God took hold of Zeke showed him such wondrous sights too splendid to behold. God revealed the new temple, but this temple wasn’t just a remake of the old brick and mortar they remembered back in Jerusalem. This temple represented the final declaration that all things will be made new! Peace and Love reign forever! God will bring all of creation full circle!

With exact specifications, God described the new Temple, the division of land, and the order of worship with precision. It reminds us of Moses’ Tabernacle and Solomon’s Temple but then again, completely different and new. The only other heavenly vision to which we can compare is John describing his experience in Revelation.

But that’s another discussion for another day.

God ended Ezekiel’s life and his ministry with hope. God was faithful to His promise that painful consequences would come, but God didn’t leave them in their despair. He promised that everything would be made right again.

He is promising that to you too.

One day, every hardship you have experienced will be made right. God will fulfill everything He has promised.

While we are waiting for our faith to be made sight, we will hold tightly to anchors of His presence and experience in our lives!

3 thoughts on “Heroes of the Faith: Ezekiel, Priest turned Prophet”