Are you going through a difficult season? Do you find it difficult to have joy? Is complete joy even in hard places possible?

I believe joy is possible even during dark times because our joy doesn’t come from the circumstances around us, it comes from abiding in Christ! Our joy comes from living in the Vine and obeying Him!

Let’s study some men who were also great Heroes of the Faith. Just as if their lives were like a garden of roses, through their ministries, they experienced both beauty and thorns. They will show us what it means to follow after God no matter the cost.

The study of these prophets and how they relate to each other begins with the time and place of Jerusalem before the Babylonian captivity. Starting with the prophet Isaiah, he warned the people of Israel that the result of generations of disobedience and sin would be severe consequences of destruction and exile.

Jeremiah succeeded Isaiah in this ministry to the people through God’s calling, his direct experience with God, and through suffering significant persecution.

As God called Jeremiah into his unique ministry, we discover even before he was born, God had a plan for his life. God created and knew him and had set him apart for the specific task of prophesying to the people. Jeremiah 1:4-5 says,

The word of the Lord came to me:

5 I chose you before I formed you in the womb;
I set you apart before you were born.
I appointed you a prophet to the nations.

Jeremiah felt unqualified because of his age (v 6), but God promised to give him the words, the places to go, and most importantly, to be with him no matter what (v 7-8).

This invitation into ministry was a signpost to Jeremiah about God’s foreknowledge of who he is and His plans for Jeremiah’s life. In God’s sovereignty, He knew exactly why He made Jeremiah for this exact season. Though Jeremiah felt unqualified, God promised to be everything he needed.

Jeremiah’s direct encounter with God was an anchor for his ministry. Jeremiah 1: 9-10 says,

Then the Lord reached out His hand, touched my mouth, and told me:

I have now filled your mouth with My words.
10 See, I have appointed you today
over nations and kingdoms
to uproot and tear down,
to destroy and demolish,
to build and plant.

In each of the prophets we are studying, I find it fascinating to discover the way God revealed Himself to each one of them. Here, God reached out His hand to touch Jeremiah’s mouth and filled it with His words. Jeremiah was being equipped and given everything he needed to fulfill God’s call.

When times were tough, he could look back at this direct experience with God to remind himself that, yes, this is what he was supposed to be doing. When he felt isolated and alone, he could think back to how God powerfully revealed Himself and know that God was with him through it all.

During these verses, we also see that God described Jeremiah’s mission, his audience, and his purpose. He would be appointed over nations and kingdoms to tear down but also to build up. If Jeremiah ever needed a reminder of why he was a prophet, he could recall this experience as motivation to keep going during hard times.

Jeremiah suffered severe persecution at the hands of his own people- the very people he was called to serve! The people of his hometown wanted him killed. Instead of taking matters into his own hands, he brought it before God. Jer 11:18-23

Jeremiah was put in prison for preaching. Jer. 31 The people hated him for what he preached, but he continued to speak what God told him.

He was falsely imprisoned though he stood up for himself, pleaded for his life, and asked to get what he needed. The king didn’t want to listen to him, but he sure did want the blessings that came with Jeremiah’s preaching. Jer. 37

In chapter 37, he was falsely imprisoned. Most notably, Jeremiah was thrown into a cistern to die! The list of suffering goes on and on.

Jeremiah was persecuted for preaching, hated, not followed or liked, always did the hard thing no matter what, and was imprisoned for speaking the words God had placed in him. No wonder he was called the Weeping Prophet! He had good reason.

But, what strikes me most about Jeremiah is why he wept.

He never stopped praying and interceding for Israel, it’s people, and their broken relationship with God. No matter how badly he was treated, he still interceded for the people. He still wanted what was best for them. He knew a hope and future was promised to the Israelites (Jer 29:11), and he wanted them to understand and see the depth of how far they were from God.

Jeremiah’s relationship with God sustained him through all of this because God promised to be with him no matter what. Jeremiah always brought his worries, frustrations, and pain to God, yet he never wavered in his obedience and faithfulness to preach and warn the people. In this difficult place is where God promises to bring complete joy.

Joy doesn’t flow because everything if fine and dandy. Joy overflows because of abiding in God!

What can we learn from Jeremiah, the Weeping Prophet?

He was a Hero of the Faith that shows us the heart of following after God. 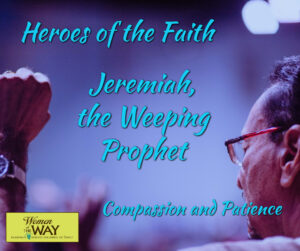 Despite immense pain and suffering, he continued to minister to the people with compassion. He saw them as God saw them, and this compassion helped him to persevere.

We should keep that in mind as we minister to those around us. No matter how people treat us, we should strive to see them as God sees them and allow His love to flow through us. When these hard times come, we can remember our invitation and experiences with God as an anchor to His faithfulness to complete what He started in us.

In man’s eyes, Jeremiah’s ministry was an utter failure. God told him the people wouldn’t listen, and they would hate him. In God’s eyes, however, Jeremiah was a huge success! God measures success in faithfulness and obedience, not in followers and popularity contests! Then, the results are up to Him. Thank goodness!

We should measure our success in the same way. Are we looking solely at the numbers, the likes, and the responders? Or, are we keeping our eyes on God, remaining faithful to His call, staying motivated by His revelation to us, and loving Him with abandon? All the while, allowing the results of ministry to be surrendered to Him?

Lord, help us to be like Jeremiah, the Weeping Prophet~

If you would like to study more about Jeremiah and the other Heroes of the Faith, sign up for this email mini course send to your inbox. I’d love to hear your thoughts about it! Sign up here!

4 thoughts on “Heroes of the Faith: Jeremiah, the Weeping Prophet”